In May I went to a workshop in Italy, run by Tania Katan and Angela Ellsworth. It was a mix of meditation, writing and visual arts, centred around themes of topography, memory, and sensory perception: the Topography of Memory, at Spannocchia

As part of the week, we had a wine tasting for the wines produced on the Spannocchia Estate – the grapes are grown, harvested, made into wine, bottled – all on the Estate.

There were eight of us, a magical week of shared experiences and creative impulse, that I will not describe here. This post is about the quilt that I made, starting at the wine tasting.

We tasted red, rose, white – which was palest yellow – the golden fortified and clear grappa. Five colours, five textures – each liquid having its own unique viscosity and each glass type a smooth but differentiated touch against the lips. There were five sets of perfumes, not a single aroma from each wine, but a whole range which we tried to identify from the wine tasting wheels with their strange and vivid descriptions – fungal bubble-gum fruit… And the sounds – of wine trickling into glasses, of laughter and delight as we tasted, of the rims of the glasses sounding, sounding echoing, fuzzing across the room, against the touch of our fingers. We made music.

I became… slightly obsessed… with the idea of a quilt. When I returned to the UK, I started to draw and paint the experience.

4 sketches: trad-style concept for the quilt, wine glasses vibrating from above, glasses set out in pattern, with calculations, and 8 women vibrating wine glasses 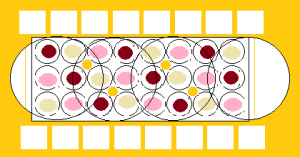 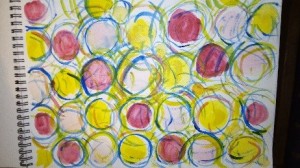 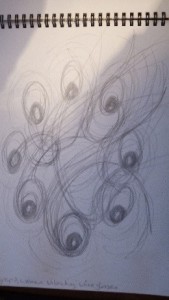 Concept sketch – yin-yang of the group and the wine.

Next, I went and looked at fabric. I needed something that would proxy the translucent nature of the wine and glass, and the echoes and vibrations of glass music, and the interactions between us.

I found net. I have not worked with net before, so I bought some lengths in red, pink, pale yellow, white to work with. I found that layering the net produced iridescences and merged colours that were very interesting.

My ideas for the quilt started to change because of the nature of the net itself. I envisioned overlapping the pieces more, and more randomly, than I had at first thought. The quilt needed to be a little wild, a little uncontrolled. It needed to reflect that there are 8 of us, one group, 8 individuals, and within that duos, triples, quartets, sextets, in all the permutations. It needed to be public and private – shared and hidden. It needed to be delicate, graceful, vulnerable to harm, easy to damage, easy to repair. Loosely assembled, yet strong together or apart. 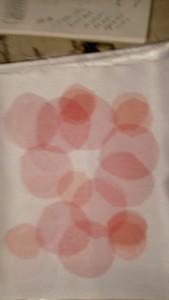 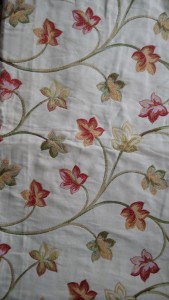 Then I realised what I needed: for each person, a white square. For each white square, 8 red, 8 pink, 8 yellow, 8 mauve and 8 orange circles – for the drinks. And 1 white net circle for the tasting wheel. I realised I wanted to quilt the squares as separate pieces and join them together – but maybe not permanently. I realised the tapestry fabric was too heavy – I needed a neutral gauzy fabric for the background. I found a grey scarf in the charity shop, just right for the background. I found some grey satin in my fabric bag for the back of the squares. I got some quilt wadding. I also had 8 colours of sewing thread. I started cutting and arranging. I cut all the circles and the white square, and I arranged and sewed the circles to the squares. Half the squares are shiny-side-up and half are mat-side-up. Each arrangement is semi-random, and unique.

4 Photos: starting to set out a set, starting to quilt one of the backs of the squares, a set laid out for pinning and sewing, and ribbon and bead colours 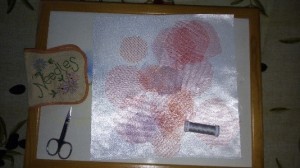 Then, I cut the eight grey satin squares, and eight pieces of wadding, and quilted the satin to the wadding by hand. On each square, I used the 8 different colour threads, but I focused a different colour on each. Each design is different, each has some reference to the week. All are curved, hand-stitched quilting.

Then, I had to decide how to join it all together. And I realised, it needed to by joined in a way that it could be joined, taken apart, re-joined in a different order. That the net side or the quilt side could be front or back (tho’ I think of the quilts as more hidden). So, the answer was – ribbons and beads.  I got some ribbons of 4 different colours. I had some large beads. And, at the Birmingham Festival of Quilts there was a stand selling Italian buttons and beads. I could buy a set of cloth beads in colours to fit with the quilt.

Now, I was ready to join the back of the squares to the front of the squares. I used a different colour thread for each set, and blanket stitch. I inserted ribbon at each corner, alternate loop and tags.

I sewed by hand again – I knew machine sewing was wrong for this project – too violent, too mechanical, too certain.

As I finished each square I set it on the grey scarf, uncertain where this was going next.

Photo: Starting to lay out the pieces 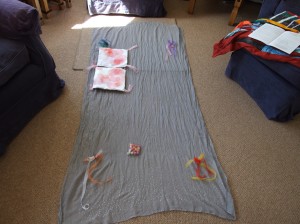 Once I had finished the squares, I tied the ribbons together, so the eight were joined. Then I had to work out how to attach them to the background. I played around with the ribbons and beads, and eventually set is out with 4 large silk beads each with 2 colours of ribbons down the centre of the grey scarf. This stands for the 4 groups of 2 – we shared rooms in pairs. The eight quilted squares join in pairs to these four., Then more smaller beads are sewn on around the scarf, so the quilt squares also tie to them. They can be untied and moved around, whenever.

NB: the tapestry will get used for cushions or curtains.

The finished wall hanging of quilted and tied pieces: the pieces are designed to be tied and untied, so on can keep rearranging, decide which side to display, and so on.

2 photos: arrangements of the tied quilt

A wonderful, magical week, a wonderful magical afternoon, a beautiful group to be with. The quilt can never be finished, because you take it apart, and make it again. (I originally typed “take it about” and that is true too – it is light and portable, and I will take it to visit my companions from the workshop this autumn).