This morning, fresh from a long night’s sleep after I returned from the EuroSTAR conference, I sat in the conservatory and watched the sky – a skein of autumn geese flew high, by v-skewed across the pale autumn sky. A murmuration of starlings. The parliament of rooks that sweep across the garden. I refilled the bird feeders for the smaller birds, and reflected, how blessed I am to have found this place as my haven and my home.

In autumn 2016, I travelled by train from Budapest to Stockholm, via Hamburg and the ferry. This is an exciting journey, passing through so many places of historical interest, and such varied landscape. But, it is also exciting because the train from Hamburg to Copenhagen goes on the ferry – they drive the train onto the ferry, with you on board, and then off the ferry on the other side of the water. I love long train journeys. I love to go from one end of the line to another.

This quilt celebrates that journey: the colours of birch woods and autumn leaves, dense woodland, rocks, cities and water streaking past the windows of the train.

The first part of the route is a train from Budapest to Hamburg.  This train was a delight. Old fashioned compartments and a dining car. I had the company of a group of Hungarian lads on their way to Prague for the weekend. They leapt on the train at the last minute before it left Budapest, opened up their packed food and ate continuously all the way to Prague. They did not stop eating! The capacity of youth for food!

At Hamburg, I left the train and met my brother who joined me for the second part of the journey – especially to experience the train on the ferry between Puttgarten & Rødby.  He is keen on trains so had a great time photographing all the different trains, on all the platforms, on all the stations…  and we talked, and talked, and talked… The capacity of middle-age for conversation!

We spent the night in a hotel, and got the train to Copenhagen next morning.  Through countryside, and then we drew into the station Puttgarden to await the ferry to Rødby. My brother took photos of the train, the train driver, the view through the train driver’s window, us on the platform, on the train, by the train, of the ferry as it came in…  The excitement of being on a train pulling onto the lorry deck of a ferry cannot be overestimated – it was brilliant! Once the train was parked in the lorry deck of the ferry – on its own rails – everyone got off the train and onto the deck to enjoy the sea crossing.

It was a beautiful day, the sun sparkling on the water and the gulls wheeling above. The colours of the world had changed from orange, russet and gold to blue, silver and grey. As the ferry drew into dock, all the train passengers had to rush down to the lorry deck and get back on the train before docking, as it sets off as soon as the front of the ferry opens.

In Copenhagen we changed trains, and again crossed water, this time via the ØRESUND BRIDGE and then north through gathering darkness to Stockholm.

I took numerous pictures, but the ones that most evoke the journey for me and which are the source shots for the quilt are the slightly blurred landscapes. Here are some of the inspiration pictures for the quilt. 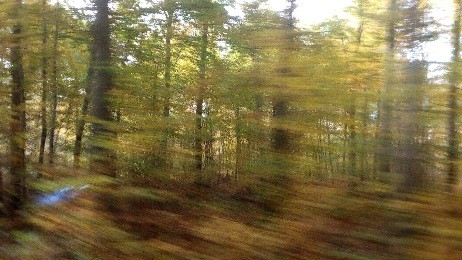 I made a preliminary sketch based on these impressions and memories. 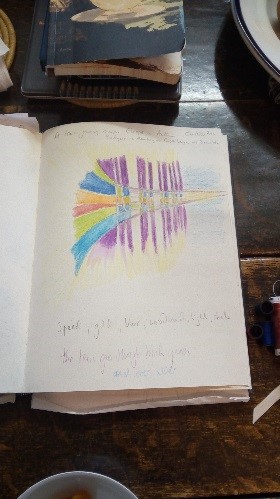 The key inspiration was the way that – from the point of view of the passenger – the landscape rushes past the window, becoming smaller as it moves away. The colours of autumn and water streak past horizontally, while the trees and their reflections make strong vertical lines – especially the birch trees, strong yet delicate.

I gathered fabrics in colours that matched the autumn and water, and started to play, plaiting, rouching and manipulating the fabric, experimenting, sewing and unpicking. Gathering, and gathering. 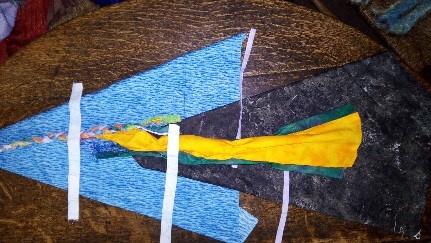 Eventually a theme started to emerge, but I was sketching with fabric – I did not know where it was going to end. The photos below show some stages I went through. 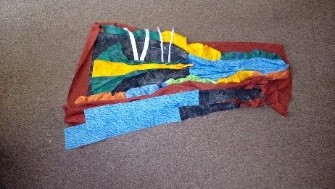 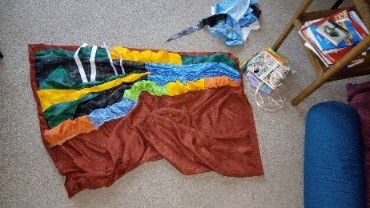 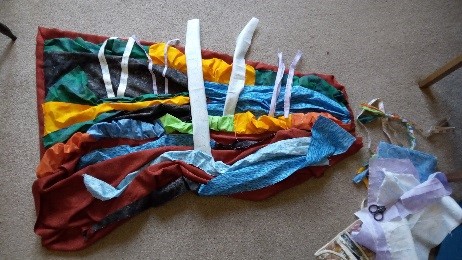 I’ve used the material itself and folds to indicate waves on the sea, and folds in the landscape – from the furrows in ploughed fields to the roll of hills and sides of mountains.

As I manipulated the fabric, the ideas for how to express the quilt’s theme changed. The essentials of horizontal lines moving to a point to give left to right movement, punctuated by the horizontals to represent birch trees remained, but the colour, texture and draping qualities of the various fabrics affected how I could use them.

Eventually I stopped pinning and tacking, and went to the sewing machine – I had to commit to this or it would never happen. 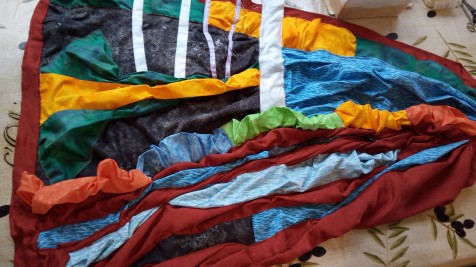 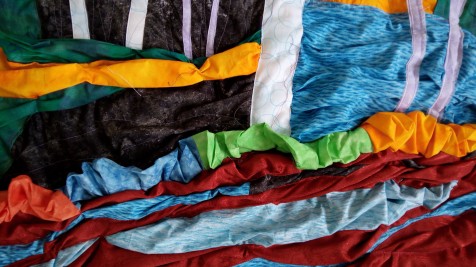 I spent a couple of days sewing with the machine, pulling the fabric around, adding details, joining fabric pieces, overlapping, pleating, rouching and running quilting stitches over the surface – pale vertical stitching to indicate trees, and blue horizontal stitches for water and wind.

And is this the finished quilt? 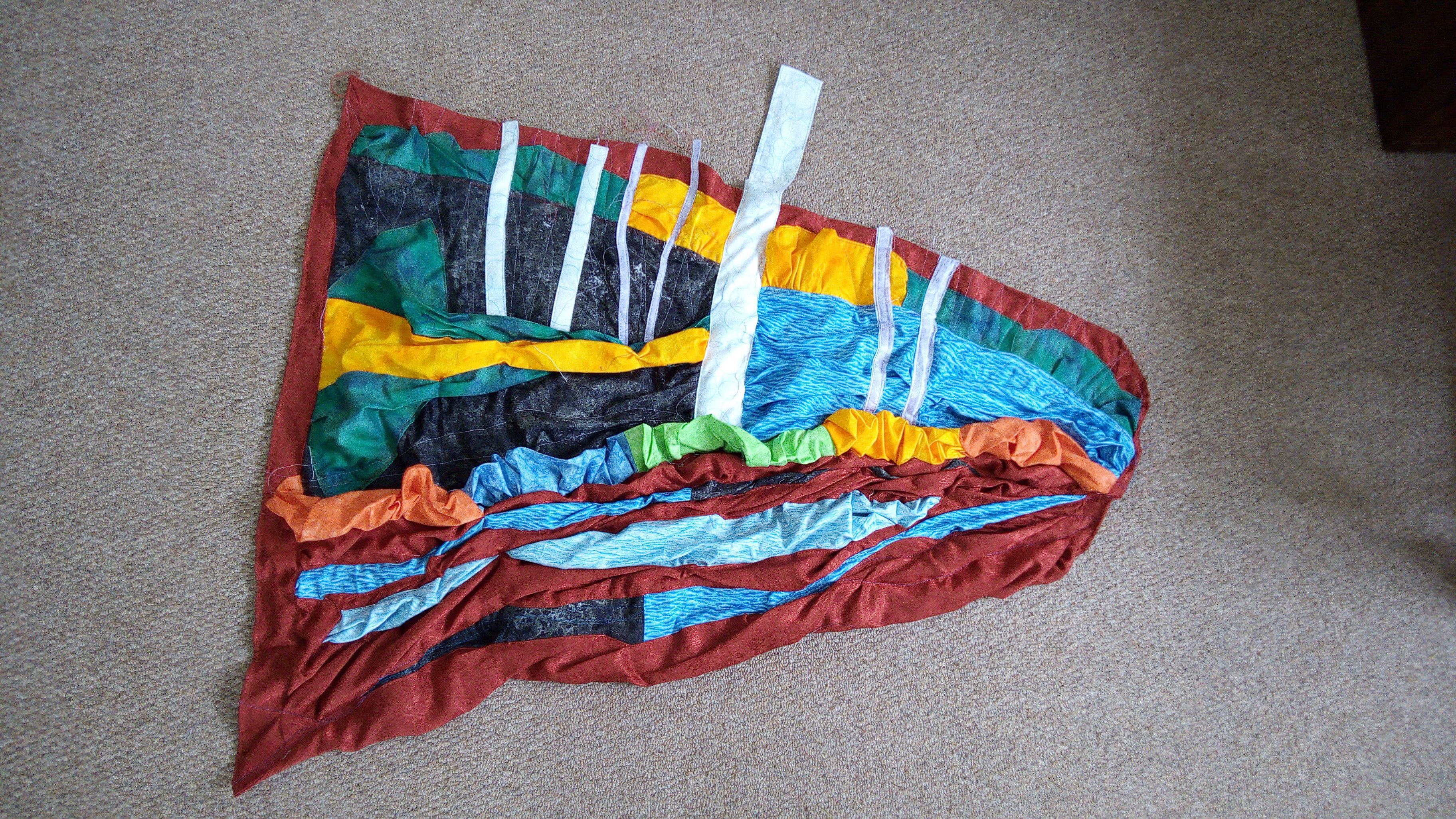 It is as far as I can bring it at present. As ever I am dis-satisfied, but it has some aspects that I am pleased with. It does feel vertiginous, it make you feel a little dizzy to look at, so there is some sensation of speed. The folds of the cloth do indicate the folds of the landscape and waves on the sea. Probably, I would like it to be longer horizontally and smaller vertically. But there are some ideas I can reuse.

An autumn train journey across Europe from Budapest to Stockholm

Woods and fields, trees and rocks, sea and ships, towns and cities.

Thank you to the HUSTEF, UCAAT and EuroSTAR conferences in 2016, whose choices – of date, city, and myself as one of the speakers – meant that I had to make the journey between Budapest and Stockholm, and could choose to make it by train and not plane!

When planning this trip, I consulted “The Man in Seat 61” and I recommend him if you want to plan or dream a train trip anywhere in the world!